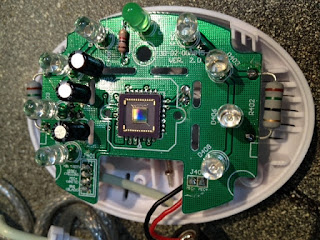 Quick post, mostly so that if I get back to this project I'll remember where I left off. Opened up an old Summer Infant Baby Monitor. The screen part had long since broken been disposed of, but I still had the camera/microphone piece.

The unit in two parts, that hinge on each other. The part in this picture contains the camera, microphone, and various LEDs - presumably infrared. The other part (pictured below) contains the power socket, switch, antenna, and a circuit that presumably deals with transmitting via RF.


I was trying to see if I could get a picture off this thing. The four wires coming out of the camera unit are


Connected red/black to +5V/ground on an Arduino, and the yellow/white to analog pins 0, 1. Ran the following simple sketch just to see what came out.

Very crude, but the mic outputs 0 most of the time, except when you tap/scratch it. So definitely a signal there. A little harder to tell with the video. But it did seem to be outputting different streams of numbers when you wave in front of it.

I was more interested in the video, so for the next step I connected the yellow video pin to the TX on my Duemilanove. Then using a trick I read about in this TTL Serial Camera Tutorial I loaded an empty sketch onto the Arduino so that I could "hi-jack" the serial lines.

I also used the CommTool mentioned in that article to see the output. Unfortunately I have no idea what this camera on the board is, and there's no input to it exposed. It just starts streaming data in some format when you apply power. The interesting thing when using it over serial was that when the lens was completely blocked with something very dark, it stopped streaming data. When you expose the lens, it starts streaming again.

Next step is probably to do that and try and capture the output into a file so that I can make an effort at identifying the format and perhaps display the content. For now this goes into a box of things to play with another time. 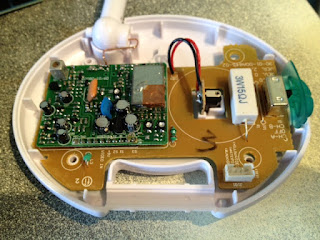 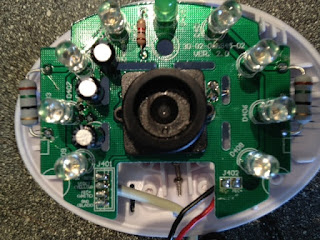